When a North Carolina biopharmaceutical company’s productivity was limited by the state fire code’s  “Open Use” restrictions, the company’s Environmental Safety Department found itself facing chemical storage challenges at a new level. 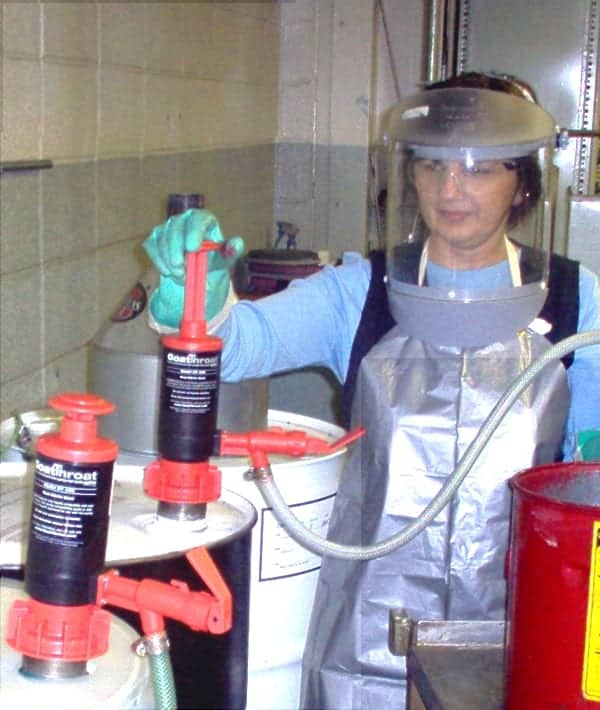 Engaged in the design, discovery and development of NNR Therapeuticas™, a new class of drugs for the treatment of multiple diseases and disorders of the central nervous system, the biopharmaceutical company uses chemicals and solvents such as: Ether, Methylene Chloride, Chloroform, Hexane, Ethyl Acetate, Isopropyl Alcohol, Methanol and Toluene in its process.  The company’s productivity problem stemmed from fire codes specifying that 5-gallon containers of these types of fluids had to be stored on the 1st floor of their facility, when actually the solvents were needed in the lab on the 4th floor of the building.

The complicated logistics were dictated by restrictions in the fire codes, which limit the storage and use of certain chemicals in multi-level buildings in order to minimize the potential fire hazards.  The codes stipulated that the higher up in the building the fewer  “Open Use” containers were allowed, because fumes, VOCs, from high vapor-pressure and flammable liquids are fire hazards, due to their increased potential for static ignition. In addition, the “open use” allowed excessive VOCs which posed a threat to worker safety.  In order to have the fluids handy on the 4th floor for the lab technician’s immediate use, the company was facing the possibility of using 1-gallon bottles of each of the fluids instead of the more cost effective 5-gallon containers.

North Carolina’s Fire Codes defined an “Open-system” or “Open-Use” situation as: “The use of a solid or liquid hazardous material involving a vessel or system that is continuously open to the atmosphere during normal operations and where vapors are liberated, or the product is exposed to the atmosphere during normal operations.” Also the code defined non-compliant, open situations as “…situations where hazardous solids or liquids were being dispensed from or into open beakers or containers”, making the process at the biopharmaceutical company a prime example.

Based on the arrangement of the facility, the codes dictated that only containers up to 1-gallon in size were allowed to be open or stored above the first floor. The situation presented a choice for the facility:  Continue the time-consuming practice of dispensing chemicals from large containers into smaller ones, and transporting containers of fluids from the ground floor to the 4th floor; or take on the increased cost of purchasing solvents in smaller-quantity containers, so they could be stored near their point of use in the 4th floor lab.  The company really wanted to both: the savings of the more cost effective 5-gallon containers, and having their chemicals close to the technicians in the 4th floor lab.

The company’s Environmental Safety Department knew that the answer to the challenge was to eliminate the open-use situation, which would then allow the 5-gallon containers to be housed on the 4th floor.

The metal pumps the company had already had tried on the ground floor were not the solution. Every pump they had tested perpetuated the open-use situation, allowing VOCs to escape into the air.  Additionally, after only a short time, every one of them leaked, spewing chemicals all over the lab personnel.  To make matters worse, because the pumps lacked a stop-flow mechanism, it was easy to overflow the receiving containers, which created a spill hazard. And regardless of the type, none of pumps could comply with the directive of a closed-use situation.

Convinced that there had to be a better way, one of the management’s staff went online to look for a solution and discovered GoatThroat™ pumps.  The pumps were designed to keep vessels closed so that vapors were sealed in the container during normal operations except when dispensing fluids, easily satisfying the state’s closed-use requirement. The department was also surprised to find that the pumps could be outfitted to be compatible with more than 700 chemicals, including Methylene Chloride, which in past tests had quickly compromised the effectiveness of other pumps they had tried.

With fittings compatible with the Rieke Flex Spouts already on the 5-gallon chemical containers, it was now possible for the research technicians to safely dispense the liquids without having to tip the vessels. Depending on the solvent’s viscosity, the easy-to-use pumps deliver a steady stream of fluid up to 4 gpm at a very low pressure of 4 to 6psi. The drip-proof faucet has a spring actuated on-off valve, which allows the solvents to be dispensed with precision control right from the safety cabinet into small  beakers ready for use, thereby eliminating spills and leaking.

The new pumps have solved the company’s open-use situation. Now, except for the 55-gallon drum of Toluene, (which is also dispensed using one of the pressure pumps), all of the necessary solvent containers can be housed on the 4th floor near the lab technicians.

Not only did the pumps solve the logistical situation, they saved the employees time and the company money. Paying for themselves in less than two months, the pumps also provided the cost-savings realized because the company was then able to purchase solvents in large-quantity containers. After two years, the original pumps are still going strong, while dangerous VOCs and odors are greatly reduced, workers are protected and breathing safely. At last inspection, even the Fire Marshall was impressed.