GOING GREEN: CAN WE BE SUSTAINABLE FOR TOMORROW WITHOUT SACRIFICING TODAY?

Some organizations choose to meet or beat compliance targets as a way to demonstrate their commitment to sustainability.   Proactive investing in environmental measures beyond those required by law can be good for the bottom line if for no other reason than to limit the downside risks of damages, hefty fines and litigation fees and public relations disasters.  But one automotive R&D lab discovered a sustainable solution that actually saved them money immediately, cost less over the long term and helped them solve several chemical handling problems.

Intertek is a leading provider of third party testing and research services to the international R&D marketplace. Intertek’s Automotive Research lab, located in San Antonio, Texas, is one of the largest independent automotive industry related testing facilities. One of only three such in the U.S., the facility performs engine, transmission, emission and related analytical testing services for engine fuels, lubricants and other fluids.

As part of its rigorous testing processes, Intertek builds to specification ASTM standard engines, so that fluid testing can be performed under precisely controlled heat and humidity conditions. An essential part of the precision testing actually begins in the engine building facility, where prior to assembly, each engine part is measured and weighed. After testing, the weighing and measuring process is repeated to evaluate changes in the components, which then yields information on the performance of the fluid being tested.  In order to accurately weigh and closely inspect the parts, each one must first be meticulously cleaned by the lab personnel with chemical solvents like: N-petane, N-hexane, Toluene, Tri-solv and Acetone.

For Intertek’s staff, handling drums of chemical solvents and dispensing the liquids through spigots was both time consuming and frustrating. Working in an outdoor drum storage area adjacent to the lab, technicians had to tip drums on to their sides each time they needed to dispense solvents, and when done, return the drums to their upright position.  The process fo 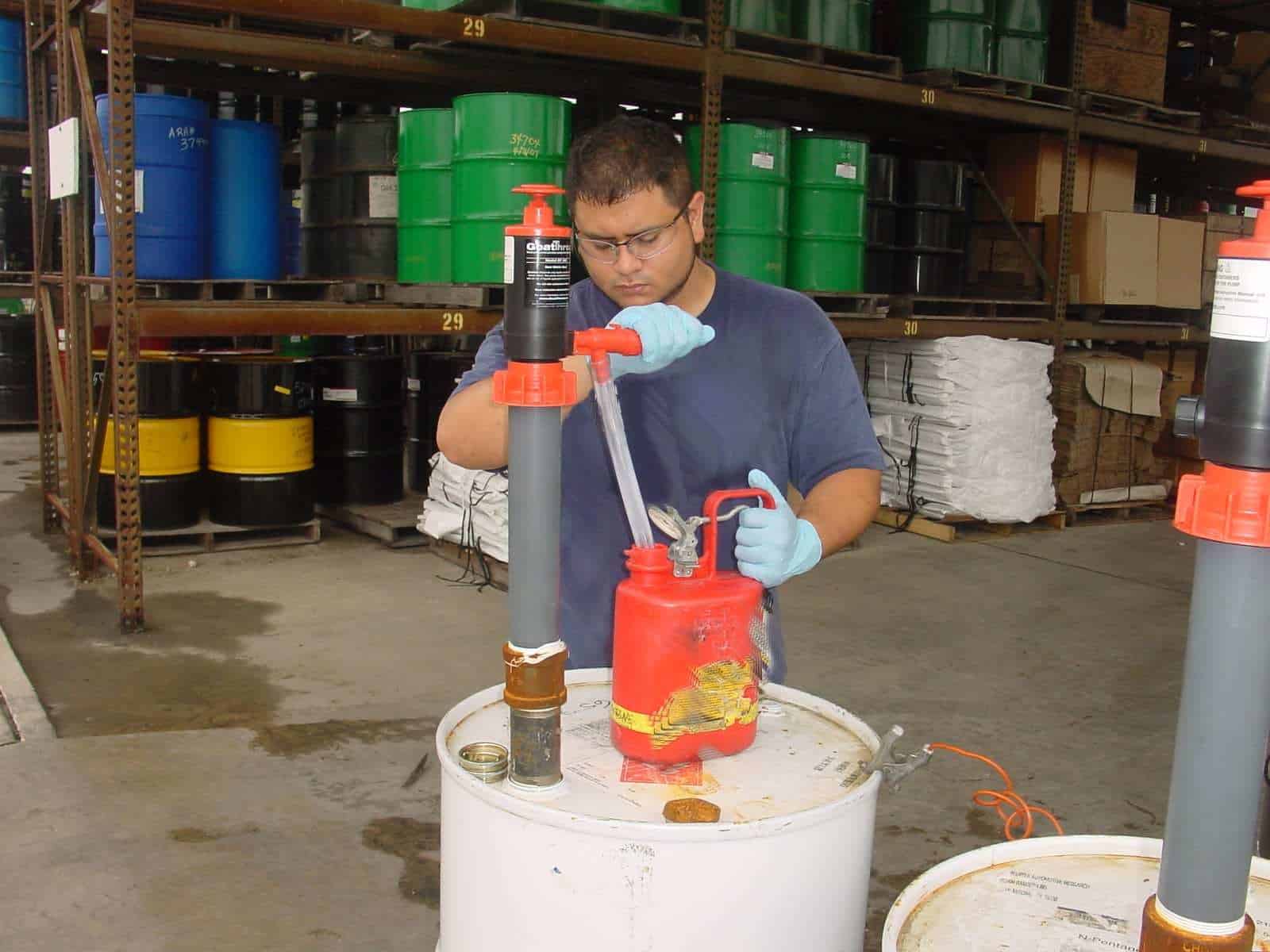 r dispensing the fluids involves first tapping the 55-gallon drums of chemicals by threading a brass fixture into the small bung in the top of the drum, threading a vent into the large bung, placing the drum on a roll down drum fixture to  tipping it onto its side to dispense and returning it to the upright position once the transfer was complete.  Each time, they had to deal with the inherent difficulties that gravity-fed spigot systems present, such as: leaking fluid, clogging and lack of flow-control, all-the-while risking spillage, inventory waste and fumes.

Moreover, the problem of totally draining the drums was awkward and labor intensive as well. Despite their best efforts, chemical fluids remained in the drums, meaning chemicals were wasted and additional labor and handling were needed in order to make the drum R.C.R.A. empty (Resource Conservation and Recovery Act).

Understanding the need to address the situation but anticipating that the solution would mean a large investment, Bob Tome, Intertek’s Manager of ES&H, was surprised to find an environmentally compliant transfer pumping system that actually would cost less and be more durable than the spigots they currently used.

Dedicated to continuous improvement of the EH&S program, Tome attended an industry seminar put on by TCEQ’s Pollution Prevention Group, which presented numerous sustainable solutions to pollution prevention in all key areas of manufacturing plants.  Tome selected and implemented several key improvements to his EH&S program at Intertek, including the pumping system for the chemicals.  Tome discovered that this system would enable Intertek’s lab personnel to safely dispense multiple chemicals directly from the individual upright drums at a rate of four gallons per minute, not only saving time and improving worker safety, but also eliminating dangerous tipping, splashing and spilling of the solvents.

With the system in place, Intertek’s part-cleaning process is now simplified and improved by the ability to transfer fluid chemicals directly to smaller lab containers, allowing them to be accurately dispensed via a spring-activated nozzle.  Additionally, the pumps allow Intertek’s personnel to empty the drums to the R.C.R.A.  (Resource Conservation and Recovery Act) compliant standards, which is less than one-half inch of fluid at the bottom of the barrel.  This saves them the time, trouble and expense of compliance related disposal services, and also reduces waste. When properly maintained, the pumps last ten years, which also minimizes waste disposal into the landfill.

“Honestly, I am amazed at the savings”, says Tome. “We saved on the initial investment bec 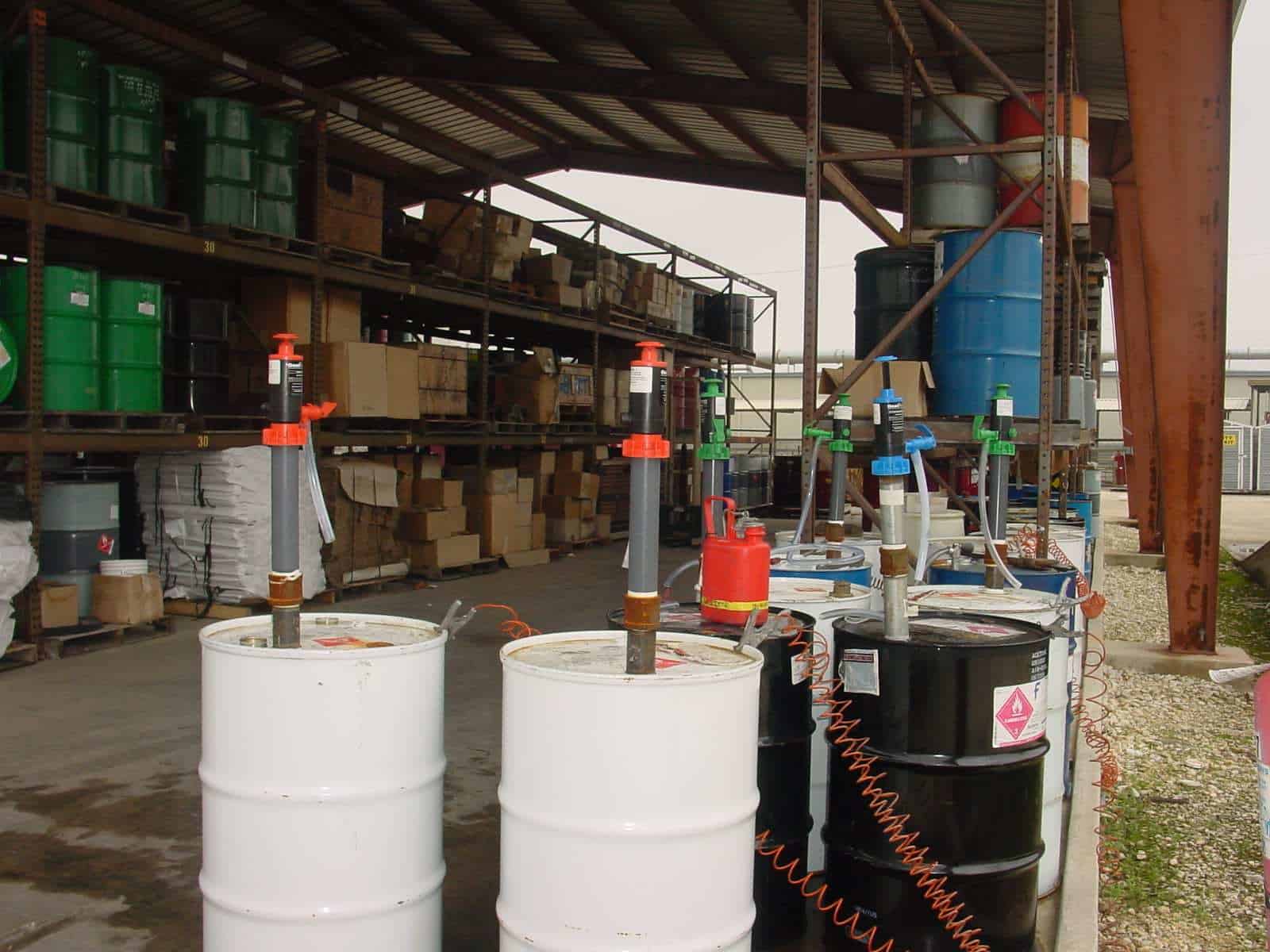 ause a pump costs approximately $300 less than a spigot. Moreover, a pump lasts up to ten years, whereas the spigots had to be replaced a couple of times a year. The savings add up; and in terms of the “bigger picture”, we eliminated asset waste, improved efficiency and worker safety and met our sustainability goals as well.”